Around 300 to 275 million years ago large parts of Central Europe were affected by volcanic activity. The Porphyryland Geopark is located in one of these highly active volcanic centres, an eruption area. At about 2000 square kilometres, this is one of the largest exposed volcanic areas of this period. The remains of these eruptions are visible today in many rock exposures (geotopes). The whole area is covered by a sheet of volcanic rocks, mostly so-called porphyry, that is at least 500 m thick today. These rocks are characterised by large well-formed individual crystals or crystal fragments embedded in a fine-grained matrix.

Most of the porphyry was formed in two main eruption events. The volcanic activities known as the “Rochlitz-Eruptions“ occurred about 294 million years ago. The second phase, the so-called “Wurzen-Eruptions“ happened around 287 million years ago. Both eruptions were so gigantic that one can classify them as super volcanoes according to current scientific thought.

What are super volcanoes?
Super volcanoes are volcanoes that produce more than 1000 cubic kilometres of ash,  clots and rock fragments in a geologically short period

What is a caldera?
Calderas are large depressions, often several kilometres in diameter. They are formed either by the collapse of partially emptied magma chamber roofs or by an explosive volcanic eruption. Geologists currently believe that several irregularly shaped calderas are found in the Porphyryland.

The formation of the Rochlitz-Caldera around 294 million years ago
Phase 1 – Initial phase (around 298 – 295 million years ago)
Ascending magma caused a large-scale regional uplift of the Earth’s crust. The increasing pressure of the gas and fluid enriched magma fractured the overlying rocks, This created zones of weaknesses along which the magma was ejected in violent eruptions. The material deposited in these eruptions is known as tephra.

Phase 2 – Main Phase  (around 294 million years ago)
The partial emptying of the magma chamber in the upper crust caused the roof to collapse slowly, during which it probably broke into several parts. Powerful explosive eruptions occurred along these fractures. These eruptions ejected fine ash particles high up into the atmosphere and produced pumice-rich pyroclastic flows and hot eruption columns. The ejected material was deposited in thick partially stacked beds on the floor of the caldera. Thinner layers also covered the surrounding landscape. This phase produced the so-called Rochlitz-ignimbrite, a rock with different material properties according to the degree of welding. The higher the temperature within the pyroclastic flow the more intense the particles were welded together.

Phase 3 – Late phase (around 293 – 290 million years ago)
Volcanic activity decreased as the magma chamber was emptied to the stage where the gas and fluid content of the remaining magma was very low. This phase is characterised by smaller eruptions of less explosive lava flows and lava domes forming within the collapse structure. The newly formed caldera was several hundred meter deep and covered with ignimbrites. With time it slowly filled with water presumably forming several caldera lakes. One of these is the petrified “Börtewitz Lake” a famous fossil site.

Phase 4 – Transition to the next large-scale volcanic event (around 289 – 288 million years ago)
Hot magma continuously ascended through the Earth’s crust. Parts of the Rochlitz-Caldera floor as well as the surrounding areas were uplifted and new lava and ash eruptions occurred along the new faults. Over the next millions of years, these processes produced the Wurzen-Caldera. 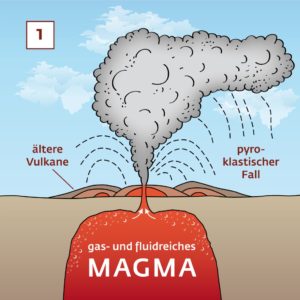 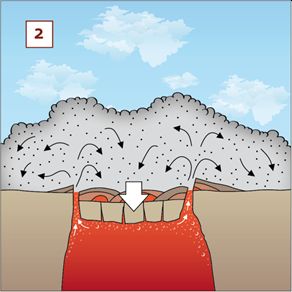 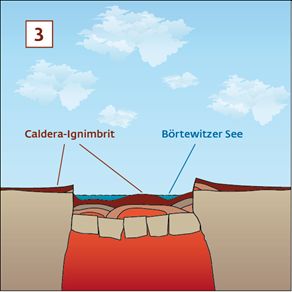 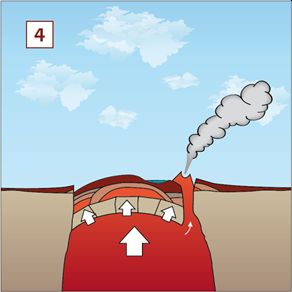