Geopark and Pleasure: Hunting and Fishing

The geological history of our Earth not only resulted in the wealth of rock types found in the geopark, it also created the basis for the present day cultural area and a diversified food production. Fishing, farming, hunting and fruit production provide the main ingredients for our tasty regional cuisine.

Wolf Dietrich von Erdmannsdorff (1648 – 1723) was chief master hunter and minister of elders in the cabinet of the Saxon elector Friedrich August I and later King of Poland, also known as “August the Strong”. As “hereditary and liege lord and Chief Justiciar “, von Erdmannsdorff resided in and managed the Kössernsche Rittergut (Knight’s estate in Kössern). The high-point of his construction activities was the hunting lodge and the opposing Cavaliers house designed by Matthäus Daniel Pöppelmann. The assembly provided a suitable setting for the festivities he was obliged to organise as the chief master hunter for the royal hunting companies. The hunts were lavishly celebrated. The painted facade and the richly decorated festival hall of the hunting lodge still radiate the original splendour. Today the association “Das Jagdhaus Dorfentwicklungs- und Kulturverein Kössern/Förstgen e. V.“ closely corporates with the owner, the town Grimma, to maintain the house and organise events. The annual concert series with more than 20 concerts regularly attracts more than 1,500 visitors from all over Germany to Kössern. The lodge also offers programs for children for example concerts with and for schoolchildren. In addition to this, the local choir “Chorvereinigung Thümmlitzwald” rehearses and performs here. The lodge is meeting place for the senior citizens of the region and a venue for tourist activities in and around Kössern, the village of master builders.

Hunting grounds and the enjoyment of game

The Geopark Porphyry Land contains several large forests where hunting is part of the land management program realised by the State of Saxony or private leaseholders. Several imposing hunting palaces and lodges are indicative of the electoral and royal hunts. The largest of these in Saxony is the internationally renowned royal hunting residence Castle Hubertusburg in Wermsdorf. In some forests one can still see that throughout history hunting was a determining factor in land management and usage. Thus, every year tourists can watch a drag hunt in Wermsdorf. This event clearly shows that the straight alleys and perpendicular transverses in Wermsdorf Forest were originally created for coursing. The animal sanctuary in Colditz shows how animals were reared for the hunt. This is probably the oldest preserved compound of this type in Germany. The largest processor of local game is Rauchhaupt GmbH in Bennewitz, district. The company purchases roe deer, stag, wild boar and mouflon directly from the forest office or from hunters in Saxony, Saxony-Anhalt, Thuringia and Brandenburg.

Carp from the Geopark

After Bavaria, Saxony is the largest carp producer in Germany. There are 8,400 hectares of carp ponds in Saxony. Around 90% of the average annual fish production in Saxony, which stands at around 3000 to 3500 tons, comes from carp pond management. Quite a large proportion of the Saxon fish production is located in the Geopark Porphyry Land. The largest supplier is the company Wermsdorfer Fisch GmbH, which manages 800 ponds and runs a farm shop (Hofladen) in Espenhain. Fish ponds and in some cases extensive fish farms were always an integral part of the numerous castles, monasteries, mansions and knight’s estates in the region.

Fish have been farmed in Wermsdorf since 500 years. In a tradition that began in 1969, the fish in the 70 hectare Horstsee are harvested once a year on the second October weekend. The event has since developed into a tourist magnet, attracting visitors from near and far. The highpoint is the professional running commentary of the carp netting. 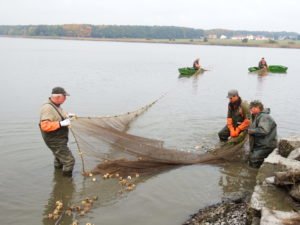 Large orchards with millions of pome and stone fruit trees, kilometre-long avenues lined with fruit trees, century-old monasteries – all tell the story of fruit-growing in this region. Located between The Leipzig Basin, Mulde Valley and the hilly landscape of the Lommatzscher Pflege is an area that has developed into one of the oldest fruit-growing regions in Germany. Fruit production benefits from the climatic and geological conditions in the Geopark Porphyry Land: mild climate, balanced precipitation and fertile loess soils.

The nuns and monks of the proselytizing Cistercian Order planted fruit trees and bushes in their monastery gardens in the mid 12th century. Later it was the Saxon Electoral courts that encouraged fruit-growing on a large-scale. In the 16th century, by decree of Elector August (father) kilometres of fruit trees were planted along the Saxon state roads. The reason for creating these fruit tree lined avenues was to mark the edge of the road when these are covered in snow in winter. Another benefit was that large amounts of fruit could be harvested in summer. Furthermore, August the Strong is said to have ordered that every couple should plant at least two fruit trees on their wedding day. Later rulers increased this to six trees. The first fruit producing company in Sornzig started at the end of the 19th century. The first civic Fruit-Grower’s Association was formed in Leisnig. They introduced the so-called “Multi-level orchards” (“Etagenobstbau“). This was the first attempt at intensifying fruit production by growing several species growing to different heights on the same area. In 1973, the government of the former GDR declared fruit production in the area between Mutzschen, Mügeln and Leisnig of vital importance: to “secure the supply for the citizens of the city and district of Leipzig”. A cold storage facility was built in Dürrweitzschen near Grimma capable of storing 18,000 tons. In 1976, all fruit producers of the region were united in the Agricultural Production Cooperative (LPG) “Obstproduktion Dürrweitzschen”.

Since 2003, the friends’ association “Obstland“ offers enjoyable Obstland tours and round trips by bus and charabanc. Rustic orchard pic-nicks, fresh fruit, juice and fruit wine tastings, or guided tours of the monasteries and small towns in Obstland can be booked at the association.

The sections of the Obstland-Route pass the Sachsenobst farm shops in Ablass, Dürrweitzschen, Leisnig and Sornzig. Look, taste and enjoy is the motto for the tour. However, even for those not hiking or cycling, the Sachsenobst farm shops are a great stop for healthy diet tips or purchasing culinary souvenirs from the geopark.  For more information about direct traders at the orchards, fruit processing in the company-owned juice and wine-making facility, or about the presentation on regional farmers market, visit their website.

The most impressive way to experience the magic of the orchards between Dürrweitzschen, Mügeln and Leisnig is on foot or by bicycle. Narrow roads with very little traffic wind their way through the hilly landscape. The 67 kilometre long Obstland-Bicycle Route is divided into three sections each focussing on a different topic. Thus the route is ideally suited for leisurely rides as well as fitness-oriented geopark hiking and cycling tourists.

The Obstland Dürrweitzschen AG is probably the largest fruit producer under uniform management in Germany, with an annual harvest of up to 45,000 tons produced on around 1,500 hectares. The company grew out of the Agricultural Production Cooperative “Obstproduktion Dürrweitzschen” in 1991 and has successfully transferred traditional regional fruit production into the market economy after reunification. The company produces and markets strawberries, redcurrants, gooseberries, raspberries, sweet and sour cherries, plums and hazelnuts but mainly apples and pears under the brand “Sachsenobst“. Part of the local harvest is processed in the company-owned juice and wine-making facility Kelterei Sachsenobst in Neugreussnig near Döbeln and sold in Central Germany and beyond.

Every year in Spring, Leisnig, Sornzig and Dürrweitzschen are bathed in a near endless sea of flowers. This is the time for the popular flower festivals. Festivities take place on three weekends between the end of April and mid-May in Leisnig, Sornzig (district of Mügeln) and Dürrweitzschen (district of Grimma). The “Saxon Flower Queen” is crowned every two years on these occasions and the winners of the “Flower Festival Showjumping and Dressage Event” are determined.